Can you say Hairpin Turn!!!

7-7-2010
We drug ourselves out of our comfy bed in Monterrey, loaded the car and reconnected with our friend Hwy. 1 North (we were friends at the start of the day..details to follow) with 521 Miles traveled and 59 degree temp. 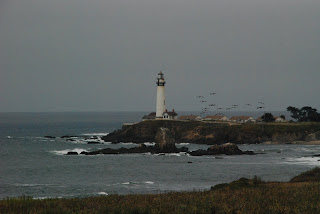 We reached the town of San Mateo and briefly had the Pacific on our left and redwoods on our right...so surreal having experiencing both simultaneously. I did spot the trips first lighthouse at "Pigeon Point" so we had to stop and take a quick photo. 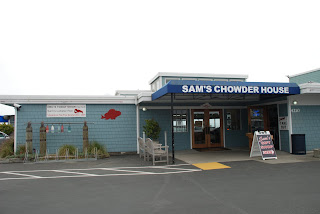 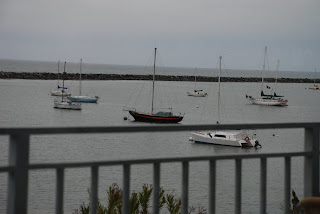 Half Moon Bay was our lunch stop at Sam's Chowder House, the best clam chowder place along the coast of California, so said the clerk at the local Ace Hardware store.  We arrived to see a large posting that it was rated number one by the Today Show for the best Lobster sandwich of 2007....still true in 2010!  I had the clam chowder as the winding road was starting to get to me...Bob had the Lobster sandwich that was packed with lobster, slathered in butter on a lightly toasted roll. My one bite (had to try it) confirmed why it was  awarded the best of..  Photo above was the view from our table. 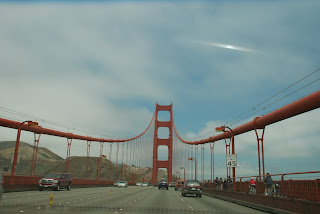 The highlight was probably seeing and going over the Golden Gate Bridge in San Francisco. Really is something, though I couldn't understand why anyone would want to walk over it?  Highway 1 after the bridge is very narrow, very much constant hairpin turns, and I'm here to tell you it never changed all day.  I've now been out of the car about and hour or so and I still feel nauseous and I still feel as though I am going through the curves.  I have ruled out the idea of every becoming a road course driver in my (fantasy) racing career!

Today we went through two more "Eisenhower" :-) tunnels, and again saw some incredible sights, some I am including for your viewing pleasure.....and not without showing more evidence of the roads! 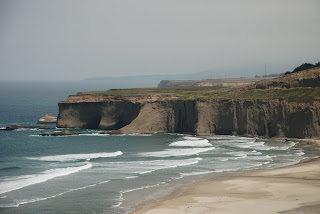 Gotta run, I think my color is starting to return and my next cup of stomach settling tea is done.

P.S.
San Diego, sorry we missed today's 5.4 earthquake...hope everyone is OK, no cell service where we are at days end.  Hugs!
Posted by debi at 6:43 PM