Our Children, Our Classroom.... 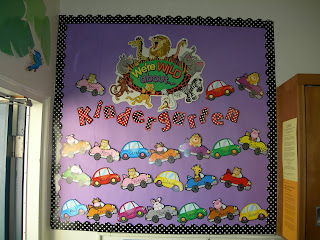 I recently spent two days in my daughter in law Katie's kindergarten class.  Let me first say, our teachers are under paid and more than that, under appreciated.  Yes, they chose to follow this career path and I have to say, thank God they have!  Who among us can even begin to imagine five days a week with, in this case, twenty three, four and five year olds? I mean today I am dealing with day four of taking care of my Grand Dog Turk while his Dad catches big fish in the Sierras.  I love Turk but I'll tell you, he is very similar to caring for a toddler.  He doesn't eat as often or wear a diaper but it takes one older woman's time and attention just the same...and yes, we baby him. 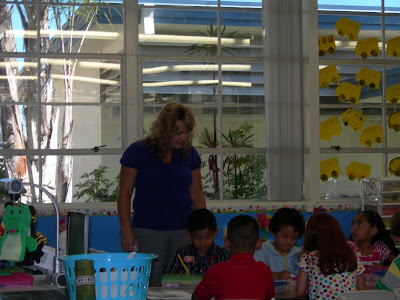 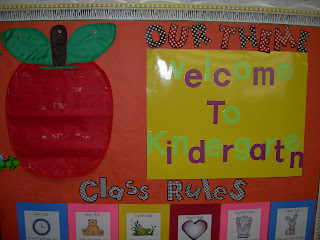 In Mrs. Stevens class (Katie), add to that moment of imagining, that most of these kids have never been to preschool and therefore never away from home until that first day of school.  Factor in that, many parents do not speak English in the home and those that do, its minimal.  Three of these kindergartners do not speak any English....really? Really.  The question I posed to my Katie, " they are at such a disadvantage how are they expected to succeed ? "  Basically she can only hope parents will themselves attempt to learn some English in order to help their child.  With twenty three children she can't possibly give these three constant one on one time that is needed for them.  By the way, parents are welcome to come to class and learn along with their child, the language that will help them succeed.

I spent most of my time with one little boy that understood no English.  No English to the point that  for a time I thought he may have some serious hearing loss.  When Katie was teaching it was clear he wasn't "present" in the learning.  When she spoke any Spanish at all, this little boys head turned instantly to his teachers voice.  Though Katie's knows quite a bit of Spanish, she can not nor should not have to speak Spanish to a majority English speaking class.   My heart broke for my little friend who failed to hear his teachers direction, I wished I could be there daily to assistant him.

At the end of day one (4 hours for me) I was exhausted!  On day two, a teacher and the Principle separately said when they passed me in the hall, "you came back".   Don't get me wrong, as a volunteer I loved being with all these kids and watching my Katie do a great job with them.  They made me smile many times and even laugh when I shouldn't have :-)  On my last day of that week, several said good bye as they walked out in a straight line with a finger to their lips as a reminder to walk quietly through the halls.  " See you tomorrow Mrs. Horton",  to me telling them " I won't be back tomorrow but will visit again soon.  The expression told me they would miss me....maybe I wanted to see that...but I trust I did.

Though I hope to help Katie as much as I can this school year, it made me wonder, why don't more parents help out, volunteer? Fact is most of these parents likely have more children at home and then there are those that work outside the home.  So, what about people such as myself ?  Why aren't they volunteering?  My guess, they, much like me haven't a clue of how great the need is.  My hope is that one or two of you who have the time will seriously consider volunteering at a school near you!  Though the line is used rather loosely in my opinion,  its quite serious......these children are our future. Yours, mine and those we leave behind!

Though we aren't responsible for the fact these particular children don't speak English, they and all the others in these classrooms deserve a bright future just like the ones we wished for our own children.  This blog is not at all about who speaks what language, it is about that fact these kids deserve to succeed  regardless and its about the blessed teachers who spend every day with them. It's about the fact they go un-noticed and under appreciated by most of us even if it is due to just being unaware.

I am willing to share some self portraits these little ones drew with you.  I found it odd, that though they are priceless and totally cute, almost all of them drew their mouths just under their eyes.....they may be unaware but  I'm going with the fact that what a child see's and hears,  is very close to what comes out their mouths and how they live their lives .....hmmmm..... 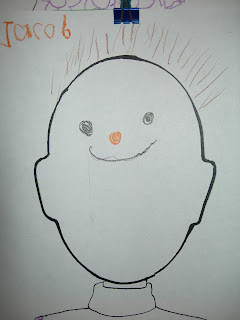 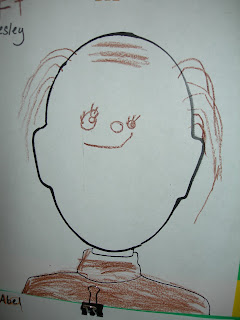 I fell in love with twenty three cute little faces that want to be excited about learning, once over the separation from Mommy subsides :-) 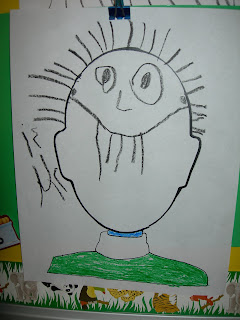 This morning I thought about how we play the role of teacher when we become a parent.  From day one we begin to teach our children the rules of the classroom, that is really what every home is, a classroom for life.  They look into our eyes with an excitement about learning from someone who loves them, " how big " ...... " this big " :-)

This morning I was looking back on my job as Mom to my boys Mike and Brian.  The early days, gone but not forgotten.  Always wanted to be a Mom, couldn't wait to be a Mom.  Didn't do it all right, but that's where God's grace comes in.  I do know they were and are my heart and I hope they live their lives based on the good and right things I taught them, the example of how I treated others, the fact that the designer label doesn't define who you are.

They had to have learned  a home can be full of love and security for them even if  you don't have money for all that " everyone" else had.  I know they learned that just because everyone else's Mom lets them watch " it " on television, their Mom was more concerned with the message it delivered than being popular in any other persons eyes. That I was given them to teach the ways of the classroom not to be there friends.  Plenty of time for that when they reach adulthood.

I'm painfully aware of parents that have tried to be a friend to their child rather than their parent.  In those classrooms its acceptable to use bad language, dress without modesty as a factor, be alone in a house with a boy or girlfriend, watch movies that are not appropriate, miss school when they aren't sick, quit at something because its hard, talk disrespectfully to another human being, teach its acceptable to lie on a whim, that its not required to be accountable or deal with a consequence for a bad choice.  They want to be the "cool" parent to their child and their friends, rather than one who takes a stand  and does so at the cost of being unpopular in their own child's eyes for a time for the simple fact that they love them.

It's most important to me that how my son's live their lives and treat others, is a reflection of what they learned in my classroom, with me as their teacher.  That all things are possible with God and that forgiveness is not an option, its theirs and mine for the asking.  With that gift of forgiveness is the fact that God cannot forgive us if they aren't willing to forgive another.

So teachers are extremely important people both in the school classroom as well as  in our  homes.  I hope that some of you will give the greatest gift you can to a teacher near you, volunteer a few hours of your week.  Praying for those parents and their children who choose to be the friend of their child rather than accepting the most important assignment of their teaching career, preparing them for the classroom of life. 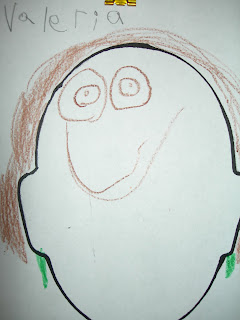 This is what echos from my heart today.....
Posted by debi at 2:35 PM 3 comments:
Newer Posts Older Posts Home
Subscribe to: Posts (Atom)