First a disclaimer, my intent is not to be insensitive to any who have divorced,
in fact I am one of you. For me it was a decision about self....as in selfish.
It took me years to realize that about myself, and I know I wouldn't have thought
so at the time if someone suggested it was the case.
I am not saying that this is always the case so please don't take this as such.
It is however, more common than not.....

I have seen more times then I care to count in life,
how vulnerable those who struggle with marriage are
to the deceivers that will fill them with lies.
When marriages are in crisis, the weak are the most vulnerable to deception from another.
All it takes is for a willing listener (many times from the opposite sex),
and it's most assuredly a guarantee they will tell you every thing you want to hear.
The same one who don't want you in their future, but are using you for the now.....
These types of people don't want your baggage, your children etc....
They will likely agree with your frustration in your marriage, they will likely even help you
justify why you should leave.

There are also, so called friends that will also encourage you to walk away.
I will be the friend to encourage you to stand by your vows.
I have learned so much about the importance of vows, the hard way.
....and after hurting many in the process.

I can tell you this, those who encourage you to walk away from a marriage are not with you down the road as you attempt to do this alone.
When you need emotional support, help with children, finances etc...
I find it oddly ironic those same people wouldn't walk away from their spouses in a similar situation.
It's always so easy to say they would, when it's not their family being torn apart.
Men (or women) who flatter and deceive you while you are in a tough time of your marriage....
are not the men (or women) who have a vested interest in you and your children....
they tolerate them at best and generally not for long.

(Obviously, this is not always the case.)

Too often divorce is selfish...
often it's only one of the parties wanting it.
Children never get a vote.
How sad is that, they never have a voice in regard
to the family, they didn't have a voice of becoming a part of in the first place.
We choose to create the family with them..
only to take them away from it :-(
Children of divorce are affected in so many ways....
What we should want is our children to see grown adults,
choosing to fight for their families.
If a family with faith in God,what an opportunity to show your children
what God can do to restore a marriage!

Because, families matter.
You be the parent that never quit,
it will mean something to your children down the road.....

I highly recommend a book called, The Divorce Culture.
I sincerely  believe I never would have divorced if I had read this book.
The main reason being,  it really spells out how selfish the choice to divorce
generally is and how it really does affect our children.
As a Mother I never could have moved forward had I known just how
much they would miss,  how much they would have to deal with, how I took
away there vote!

Often marriages go through really tough times....it's a matter of not quitting during that time.
That is what makes for a stronger marriage,
making it through the hard.....
a marriage
when nobody quits.

It echos from my heart today..

When you buy the cheapest thinnest toilet paper to save money,
you're not saving money, we use three times as much!

Winthrop Washington, Old Schoolhouse Brewery,
you win for best toilet paper in the Pacific Northwest.
The pleasure was all mine. 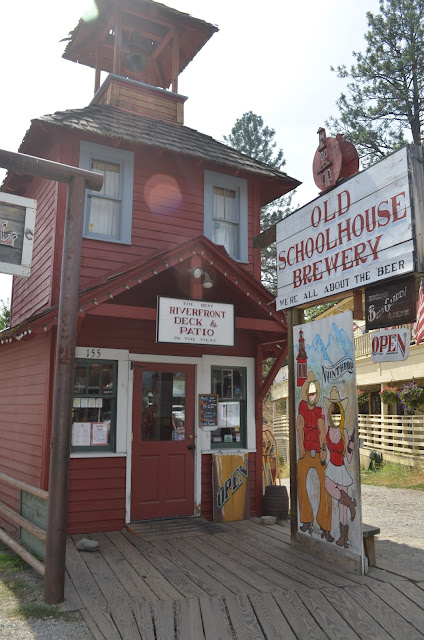 ~
Sheets and mattresses,
A good mattress is one that does not dip in the middle...
Good sheets, soft and cool, atop the semi firm mattress.
Inn at Laurel Point, Victoria British Columbia,
you win, the pleasure was all mine. 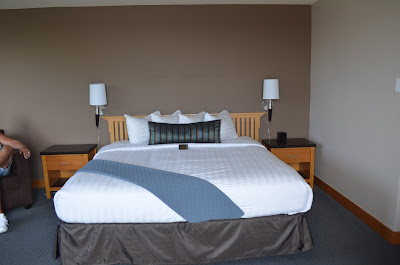 ~
Greatest find, so great I have to share.
Five Pines Lodge in Sister Oregon.
Luxury cabins, top of the line furniture, the landscape alone,
screams peace and calm.....
awesome spa, brewery, movie house.
The friendliest staff, eager to help in any way they can. 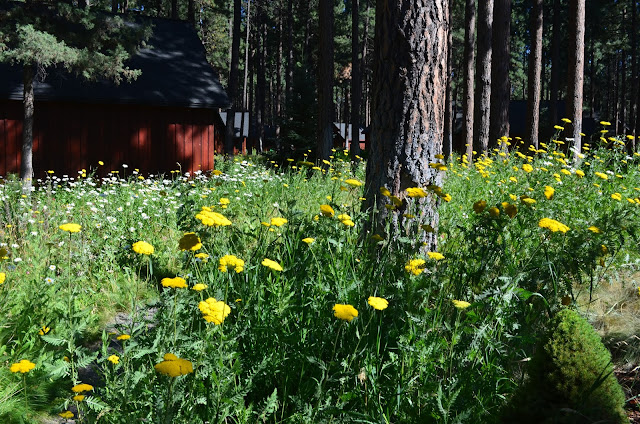 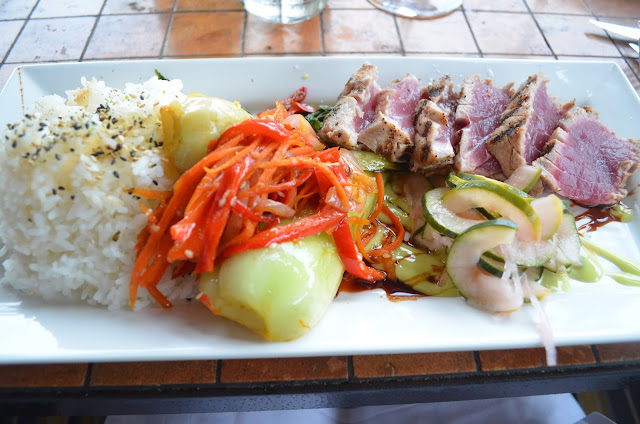 Most amazing experience of the trip,
High Tea at the Empress, Victoria B.C.
everyone should experience this! 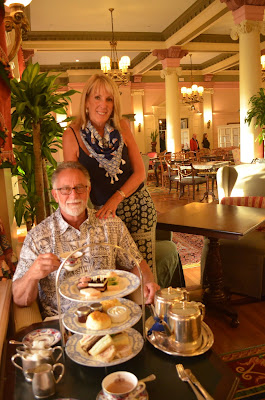 Lessons learned,
I swear, I will not over pack again.
Bob was awesome about carrying bags in and out of Hotels,
glad he puts time in at the gym! 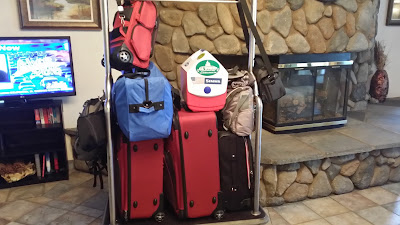 We will never again do short stays,
minimum three days at
any one spot.

Best Audio book,
East of Eden
what a great story!! 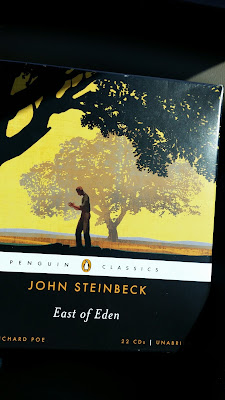 Personal highlight of the trip,
(though all were special)

meeting my blogging friend Judy and her husband.
We had such a great time with them! 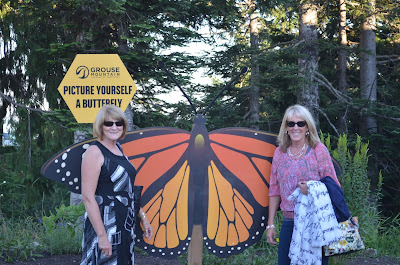 Overall we had a most wonderful trip,
spent time with some wonderful people,
had lots of laughs,
saw some beautiful country,
and made some new friends.
Special thanks to those who welcomed us into their homes,
Rene and Rocky, Dan and Nancy, Steve and Shelly, Aunt Marguerite,
Kathy and Steve, Debra and Tom!

To my cousins Greg and Shari, Cindy and Scott
thanks for a great evening in Seattle, too much fun!!
Thanks to the photo bomber as well.....


How blessed are we ?

My favorite traveling partner Bob,
I love you and love that you are willing
to chauffeur me around our country! 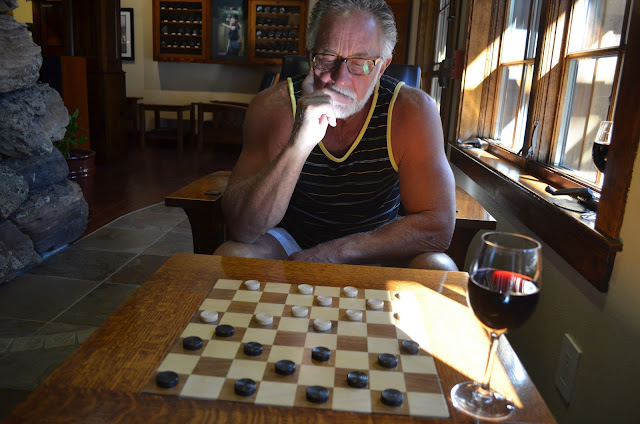 Priceless moments, it's what echos from my heart today...

The Bad and All Good Things~

The Running Y Ranch, was a very nice spot and we're so glad we found it.
Below is our suite with a view of the last nine on the golf course.
Love the room, almost felt like a home :-) 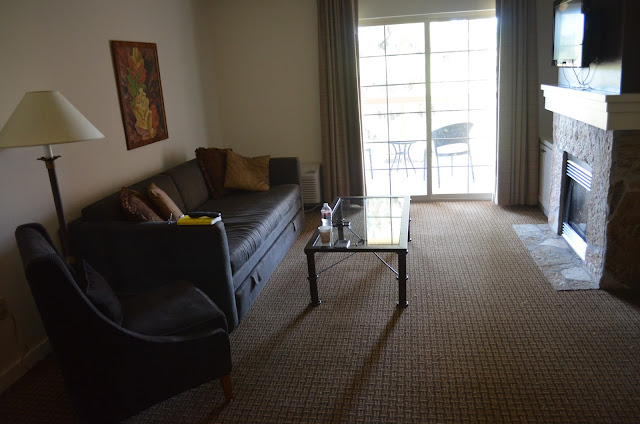 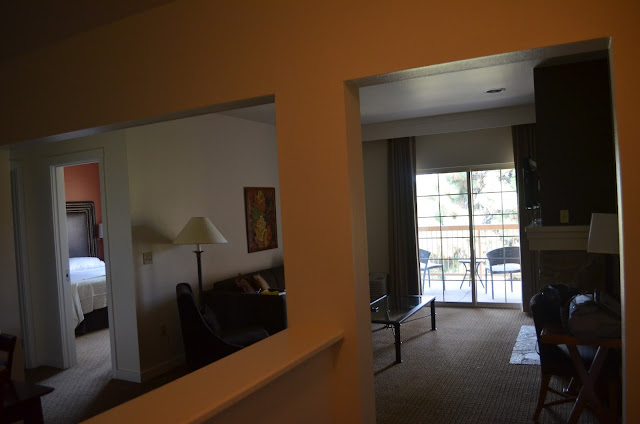 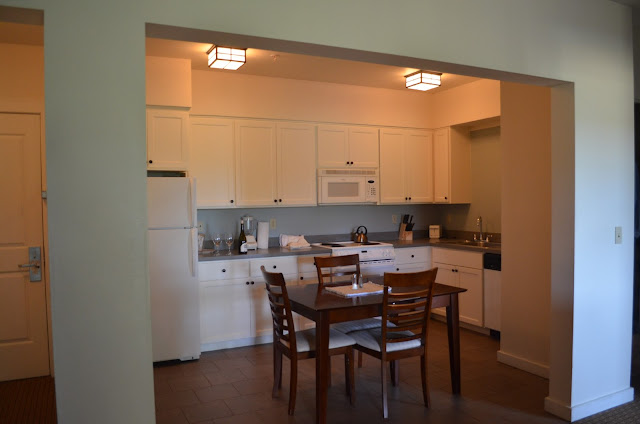 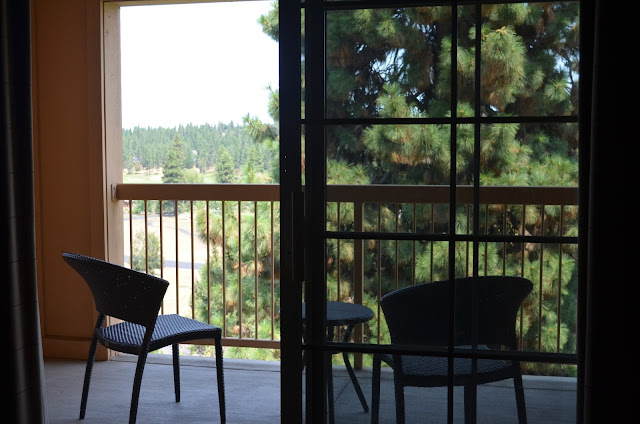 The day after my last post my back locked up on me :-(
It sorta came out of nowhere, yet I have my suspicions
it may have been a bad idea to unload the luggage up to our room
while Buster was getting his much deserved massage...

Buster arranged a massage for me, hoping to nip it in the bud.
When I left the Spa, walking was considerably easier than when I arrived.
I went back to the room to lay down, while Bob was golfing with our new
friend Tom.

That night we met Tom and Debra for dinner at their home.
Picking up the salt shaker about sent me through the roof with pain.
We did have a lovely meal in their beautiful home, with a beautiful view!
I can't describe how great these two people are, I know I'm
looking forward to spending time with them in November when they
are in San Diego!
Below is a shot from above of their awesome home :-) 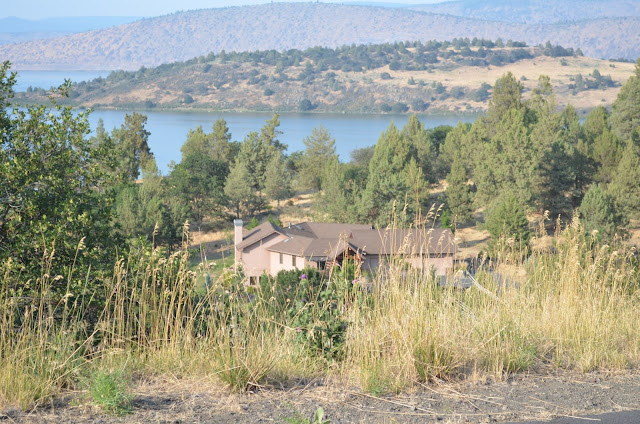 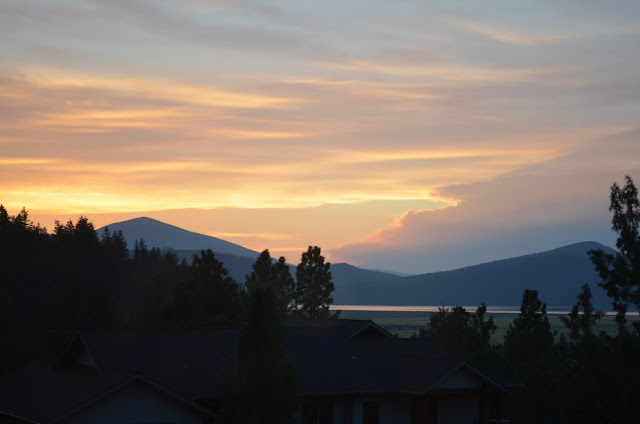 and....
view from the road heading back to the ranch. 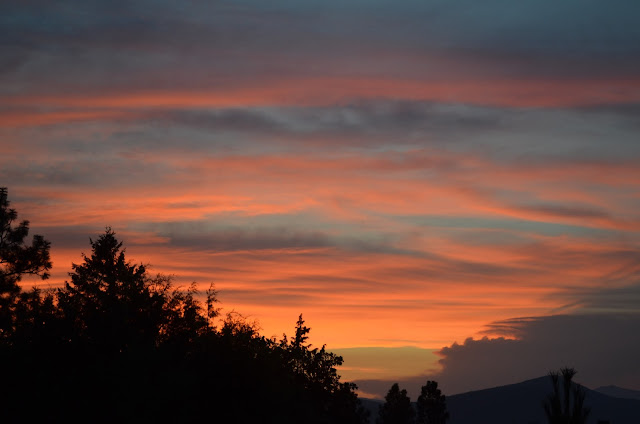 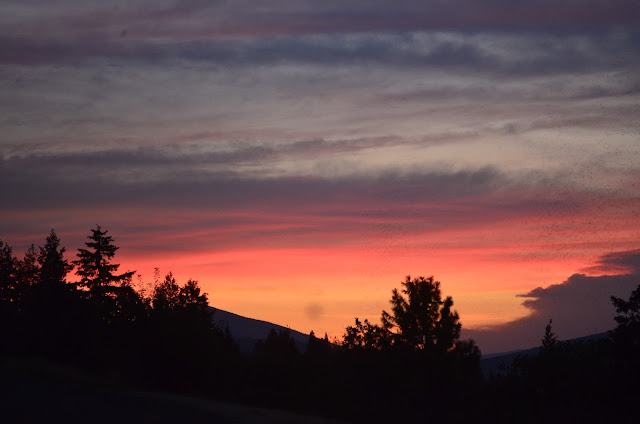 The next morning the back became much worse. I could not sit or stand, which
left me on my back in bed. Bob called the paramedics as he no way could
have gotten me to the car let alone, provide a way of laying down.
They say paramedics are good a looking sort,...I didn't notice, okay they were!
Bob quickly started loading the car with our luggage, cancelled our last
night at the Ranch and headed to the hospital.

Three hours in the E.R. and four shots later, I was released.
Nothing they can really do with a locked up back other than mask the pain.
Clearly it was time to head home..... ~

But not without another look of beautiful Mt. Shasta ~ 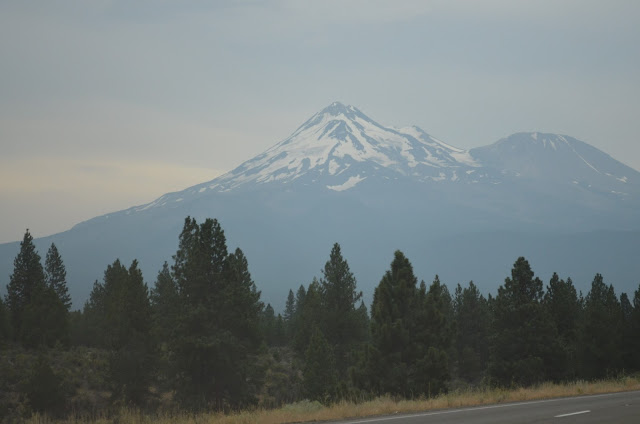 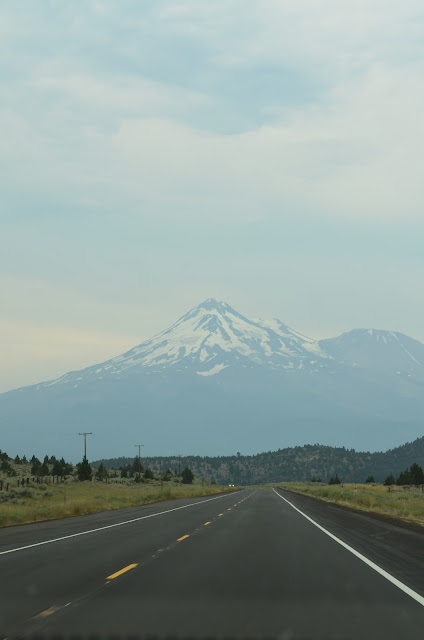 Within about two hours I was sitting comfortably in the car as we headed to Redding CA.
The next day started out ruff until the meds kicked in again and we drove to Santa Nella, CA
Santa Nella to home was about 5 1/2 hour drive.


Was so good to set foot in our home again to a warm welcome from our
friends George and Lynn who held down the fort while we were away.
We so appreciate you staying!!

The trip was great, I'm sure we will be talking about it for some time.
Thankful to all who met up with us along the way, you are each so treasured by us!
Please let us know if you are ever in the San Diego area, we would love
to pamper you as we felt pampered.
Thanks to each of you.

For those who followed along on this journey via the blog,
it was great to have you along for the ride, if only visually!

The bad back will pass,
and all the good things like this trip, come to an end.
~
The memories are socked away, only to be stirred up from time to time in times of reflection.
Great to be home, it's what echos from my heart today...
Posted by debi at 1:35 PM 6 comments:
Newer Posts Older Posts Home
Subscribe to: Posts (Atom)