So, I'm trying to remember when I became aware, I mean really started to notice, just how self centered so many people have become.  It troubles me how people so "naturally" think of self before anything or anyone, regardless of the type of relationship. That others would come second and  it seems not to matter anymore that second place was our spouses, children, parents, siblings, cousins, parents, friends, acquaintances and the stranger on the street. The norm seems to be "me", "I" or "us"  first and then there is "them", "they", "he" and "she", if there is any of us left to give. SELF.

I don't think of myself as being self centered however, there are of course times I have the thoughts of "self". How could they, he, or she have hurt me in such a way? What about me? So, I do think of me in response to hurt/pain I might feel... followed by  the thought of how and why would they treat another person in such a hurtful way? Hurting another person is not something that sits well with me, and I would not purpose to do so (not to say I never had the gut reaction to do so).  I have indeed hurt others in my lifetime.  If I'm aware I have hurt someone I can't apologize quickly enough....my heart is heavy that I have hurt them in any way or if they ever thought to be intentional. Since I was a child I can tell you, I've had a heart for others. I was never one to hold a grudge, would never intentionally cause someone to hurt. I can easily apologize and have done so even when I may not have felt I had done any wrong, an apology was due...In order to not think of me,  I had to give it as it could help remove a hurt perceived by another as intentional.

Self centered is,  selfish, that's what it is. I made a a couple of decisions in my younger years that were totally selfish, I made decisions with myself ONLY in mind. I didn't spend much time thinking how my decisions may have hurt another person(s), I was only concerned with what I wanted.  I am not proud of these decisions and I can say immaturity and selfishness had everything to do with them, and that eventually I saw how selfish I was. As ashamed as I was by my selfishness, I was accountable to those involved, I asked and received forgiveness and  I chose to leave that behavior behind!

This doesn't mean there haven't been times it hasn't been about ME since. I don't know how normal it is or if there is even a way to know for sure, but after the loss of my father, other than my Mom's future all I could think of was me, the emptiness in me and the sorrow that had taken over every aspect of my life.  In the months that followed as I carried this pain and sorrow, I couldn't think of much of anything else but how I was feeling.  To wake up daily in disbelief, that the loss was real and the ability to think beyond the moment had left me.

I can't speak for anyone else but I'm guessing it was very much the same for them.  Self, actually caused hurt feelings, and even division in the family after losing Dad. Everyone thinking about self.. We often become selfish without realizing we have. Speaking for myself, in my brokenness I raised my voice at my husband,  and ashamed to say, my Mother who had lost her husband! Saying that I am not proud of this doesn't begin to touch how badly I felt. At times, I couldn't think of anyone but me and how I felt in the moment(s).  I was spending much of my time with my Mom packing up a house full of memories, and found that I was saying whatever I had to say louder, well, it had become my new yet unconscious attempt at releasing the pain that I wanted to leave me. I had great difficulty finding a way to grieve, help pack up their house, get my Mom through a day at a time, moved and unpacked her in a place she did not feel at home....all the while angry we were without him.

I can say in the process I had many, many meltdowns to which she was on the receiving end. I could see in her how lost she was, how sad and scared she was... I felt I had to deal with her hurting,and be their for her which added to my thinking about why all this?... and ....What about me? How do I help with her pain when my own had overtaken me? Self.   I was always sorry, and always apologized to her at the end of each meltdown.  My apologies didn't take away from the wrongness of the action be it unintentional or not, yet it was important for her to know how truly sorry I was. This me, I discovered, this was me in pain. In turn, she understandably had meltdowns of her own, that she too apologized for, saying things that came from her pain and grief. Though we each understood why the other was melting down, the apologies came easily in order to move forward with the "process". We managed to get through it .....sharing our pain and loving each other through lots of forgiveness, when we were thinking of self.

So, there are two examples of "selfish and self centered".  We can make decisions without thinking of how another may be hurt by our choice..selfish. We  can become self centered in circumstances we are in with no intent of hurting another, yet is the result of self first thinking.  Selfish or self centered, I'm so glad I was accountable in both instances, asking forgiveness of those I hurt unintentionally, as a result of thinking of my wants and to those I hurt by thinking of my feelings, when  this pain was running rampant, in fact taking over what was once my family.

My Father, never would he have purposely hurt another person, never would he have held a grudge. He occasionally raised his voice in anger or frustration to another, and in that I learned he was not to proud to say he was sorry.  I believe during our time of grieving  he knew where our anger was stemming from, because he knew what he meant to us.

I doubt there was ever a time he made a decision without thinking of how it might affect others first.... he was many things but he was not selfish. I  always wanted my Dad to be proud of me and oddly enough it has meant increasingly more to me since his passing... I purpose to behave in a way he would remain proud of me. His job as a parent was well done and  I can reflect, mirror what he taught me in how I live my life and how I treat others.  I speak of this often because it is that important to me. The fact he always thought of others first and his heart toward others are how he is remembered by many.  I hope the same to be said of me one day.....

As 2010 was winding down I began to think more and more about thinking less about me and more about others.  I love all the people that are a part of my life as I do those that are not, stranger or acquaintance. I sense in many an abundance of loneliness,emptiness, sadness and pain. Gods greatest commandment, above all others, is that we love one another.  Part of being successful at loving others is taking our thoughts off of ourselves.  Today I read what love is in I Corinthians 13;

Love is patient, love is kind, it does not envy, it does not boast, it is not proud.  It is not rude, it is not self-seeking, it is not easily angered, it keeps no record of wrongs.  Love does not delight in evil but rejoices with the truth.  It always protects, always trusts, always hopes, always perseveres........and now these three remain; faith, hope and love.  But the greatest of these is love.

In another book I was challenged to, in place of the word "it" in the above scripture, I was to read it and put my name in "its" place. That in itself was pretty enlightening, I hope you will read it yourself using your own name.  So, in trying to think less of me, I hope to be able at some point to say, "it" is a description of me.

For me personally,God being the center of my life is my only chance at me being centered and not, self centered. We can attend a place of worship, we can read our Bibles, we can claim to be a Christian to all the world.  If we aren't living it, if our actions don't reflect it, if we don't walk the talk, we are not doing ourselves or our faith a bit of good. Its important to know, you may fool others but you can't fool God. So be what you say you are... If my focus is on loving others, by putting debi in place of "it" may in fact become a true description of me. All things are possible! 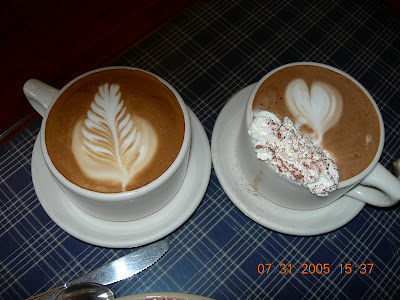