7/3/2010
Shared a nice breakfast with our good friends and current house sitters George and Lynn the morning of July 3rd.  We parted ways at 10:33 A.M, trip odometer set a zero and the adventure has begun.

Carol King and James Taylor cd  playing us down Highway 15 North and if you can believe it, as I write the song is "So far Away".  All actuality we are only traveling to Arcadia today which is near Pasadena, home of the Rose Bowl.  Blue skies, 70 degrees and we are ready to connect with loved ones and friends for an annual Stanley Independence Day get together.  Great food, drink and lots of laughs....visits with those we see only once a year at this event and others we try and see much more often.  All the kids have grown, the adults, well, we are a mellow bunch.....at last :-) Always a great time and this year was no exception.  Thanks Stanley family!

7/4/2010
After a wonderful time at the Stanley residence we shared a cup of coffee with them this morning, and after shared hugs and I love you's we hit the road for day two of our adventure. At the start of day two we have put a mere 105 miles on the car, and we headed North toward highway 101 along the Pacific Ocean.

First stop, Thousand Oaks, CA ~ The Cheesecake Factory for breakfast.....best egg white, spinach and cheese omelet ever.  After our meal we spied a Borders Book store and with only a tiny bit of feeling like I was cheating on Barnes and Noble we went in.  Made a purchase of a lap tray  and a pen so I could write easier as I found something "blog worthy" during our travels.  Oh, and since Bob will likely read this.. I admit freely.....I was unable, well, chose not to resist yet another book bag, this one covered with little owls :-)  Hey, it was only $6.00 if you bought (2) items, I felt I was obligated!  For those of you who are unaware, my book bag addiction could possibly catch up with my shoes  by 2012 or so.  For the record I have two in use on this very trip ...well, so now three... it's not like they just take up space in a closet.

As we passed through beautiful Montecito CA. the temp reads 65....but its early.  We decided to take a small detour just off the highway and stop in Santa Barbara at our favorite Bread, Wine and Cheese place....BAD, very bad idea.  We weren't thinking about the holiday and the main street was shut down we assume for a parade of sorts and traffic was ugly!  We got back on Highway One as quickly as we got off.

Several miles down the road we (I) made my first Rest Stop break since hitting the road.  I only mention this because as we pulled in I spotted our first tunnel that we would be driving through just down the way.  Tunnels remind me of my Dad as he always honked the vehicle horn as we drove through one when I was a child : -)  Tunnels always make Bob and I laugh because on one trip I insisted we were at last going through the Eisenhower tunnel when in fact...I believe we went through three tunnels in a row before we actually went through the Eisenhower tunnel.  So, I choose to announce at the first sighting of any tunnel, "look the Eisenhower tunnel" before Bob announces it for me:-). We always get a laugh out of it. 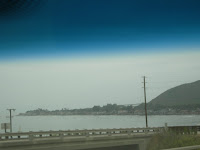 After the excitement of the "first" tunnel I look to my left on Hwy. 101 and I'm faced with the beautiful Pacific Ocean, on my right I find another incredible view.  Rolling green hills, too many to count that look as though they have a patchwork of green covering them all and they appear to kind of fold into each other for as far as the eye can see.  Just when you think it can't get any better I look in the direction we are headed at the curvy road as we begin to go down hill and look up to see very large tan mountains with large groups of green trees plopped down all over them.  These mountains are high enough that the peeks are hidden in the clouds....very white clouds against a really blue July 4th sky.  My thoughts while taking every direction in, how can one doubt there is a Creator responsible for it all?

Approaching Santa Rosa nothing but what appear to be vineyards everywhere and we spy a Blueberry Stand/field....the sign reads, "Pick and box your own ".  For many reasons, just one being that the car is full(er) with yet another book bag, I didn't suggest we stop and pick.  We pull off for fuel in Buellton, Home of the Split Pea Soup, same exit for Solvang....the land of windmills and into beautiful Santa Maria.  More hill covered vineyards and even a large field of flowers in bloom. 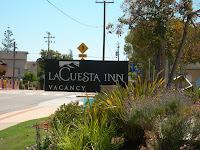 We land for the day in San Luis Obispo, discovered a very quaint tastefully decorated wine tasting store front called, Pithy Little Wine Co..  We ventured in and we're treated to some free wine tasting by the young couple/owners who actually make their own wines with grapes grown in Paso Robles.  Not only do they produce their own wine but their own Root Beer, Orange and Black Cherry bottled soda!! We bought all three flavors so we can amaze others with the chance to taste for themselves some of the really awesome soda ....this coming from me, not a real fan of soda. I suppose their is a very good chance we will drink them ourselves on our little journey......

Checked out Mission San Luis Obispo and the river that runs under the city.....yes under it. Great dinner at a place called Firestone for Barbecued Tri tip Sandwiches ...and did I mention I left home with a total of a 16 pound weight loss...it just may be the last we speak of it, agreed?  We are checked into  our hotel, showered, lazy and full... can't wait for day three!
Posted by debi at 8:34 PM