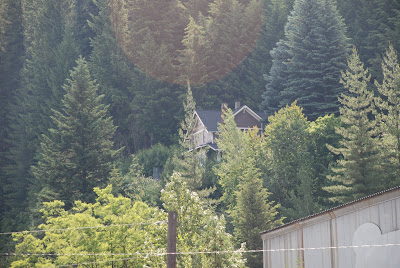 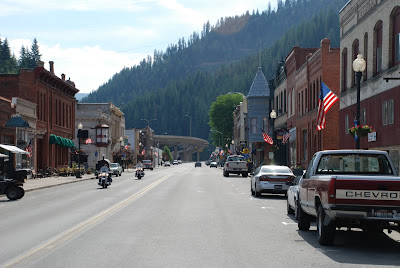 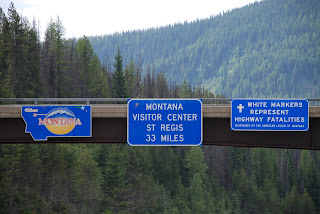 Said our good byes to the lovely Wallace Inn and snapped a couple shots of this cute little town.  I loved the little house tucked up in the hill amongst all the trees. It's pretty common to see homes scattered on these beautiful pine tree laden mountains. My Mom actually worked at the train depot in Wallace when she was young, she said she remembered it had snow on top of snow!  I think it may have been a lot :-)

We were on the road for about 20 minutes until,  I was home at last.  Montana opened its arms to welcome me back.  Yes, though I was raised in California, I was born in Montana and as I've gotten older I realized it feels like home to me....its in my soul.  It is such a huge part of my life's summer memories.  This is were we vacationed every year for two weeks my entire childhood.  I found myself getting very emotional last night thinking of the fact I would be in Montana shortly after we got on the road in the morning.  Today I realized clearly, I get emotional because Montana is where so many memories were made with my Dad.

My father worked three jobs most of my life and for the most part we saw him at dinner time....the largest quantity of time spent with him over consecutive days was always our two weeks in Montana. So there lay the connection, Montana's opening its arms to me is time spent with Dad :-)

Okay on with my day.  We hurry down the road to St. Regis Montana headed to a truck stop cafe that was recommended by a clerk at the Wallace Inn.  Below is the sign out front of the cafe....only in Montana :-) 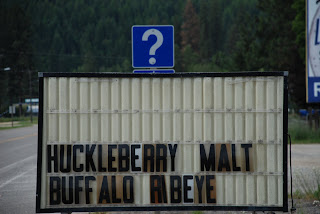 We also visited a tackle shop next store...in search of  a tackle shop t-shirt for my son.  We didn't find what we were looking for but we did  find a table set up for making flies for fishing.  The work that goes in to making one fly is something.Spools of thread lined up and ready to go! 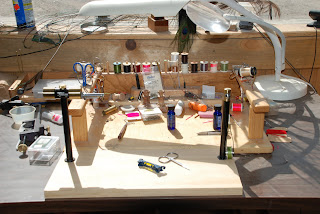 Back on the road filled with excitement of seeing my family a short 200 miles away and plenty of time to check in to our Hotel, shower and change in time for my cousin Lindsy's wedding reception.
We get approximately a mile and a half down the road and the light on the dash comes on to let us know our right rear tire was low, in fact it was holding only 15 lbs. of the 33 lbs it was supposed to hold.  We right away turned around to head back to St. Regis to see what could be done.  St. Regis population roughly 500 people, three gas stations, none with garages for repairs.

We are told of a towing company just down the street...that's where we go.  Schovos Towing, 24 hour towing for AAA members, yep we are!  Mr.  Schovo  doesn't' work on high performance tires, but can arrange for us to be towed to Missoula....79 miles down the Interstate.  We wait roughly 30 minutes for the driver to show up and Schovo gets our car loaded on the flat bed and tells me the air is on in the cab of the truck if I want to hop in. 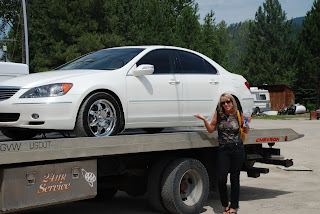 I climb up into the cab take a quick look around, "my its dirty in here".... I take note there are three seat belts but it is going to be a long ride!

I slide in and here is my dilemma.... 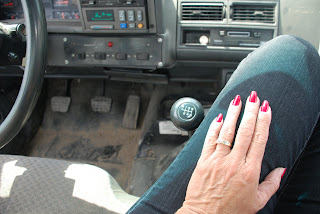 I realized in order to not sit side ways with my legs squeezed tightly together, well, that would require I put my left leg on the other side of the very high stick shift.....but wait, of course the driver will need to shift! Again, it's gonna be a long ride to Missoula.  Turns out the driver we were waiting for, says Mr. Schovo, "had to send him on another tow so lets go!"  Mr. Schovo himself was going to drive us to Missoula.....did I mention Mr. Schobo is probably 80 something?

Now just a reminder in the event you may have missed this fact.  I am a very nervous passenger even with those I know and love behind the wheel, and I am not a fan of steep winding roads with very large drop offs at the speed of 75 miles  per hour!  I try and think positive, I say a quick prayer for our safety.  We all are in (very close to one another) and we pull out onto the two lane road outside the tow company and I do mean pull out.  No stopping to see if any cars are coming, nope we just pull out in to the street.  I believe I may have yelled, "car"!  Mr. Schovo stops to avoid the first of many near misses and we haven't even got onto the interstate!!

We get on to the interstate and I say another quick prayer, can't hurt. I remind myself, its going to be a long ride.  I am holding on to Bob's arm so tightly his hand may have changed color once or twice.  I am trying so hard to hold my left leg against the right as to allow Mr. Schovo room to get into sixth gear.  At which time he says, " you can put your leg the other side of the stick shift, you'd be more comfortable".  Very kind of him to say so, and very true....however that ain't gonna happen.... Needless to say I spent the 70 some miles doing what I can only describe as an extended kegal type exercise in order to not touch the gear shift.  About half way there I put Bob's hand on my leg and quietly let him know he was going to have to hold my leg against my other leg which is against him, I could no longer hold them as tightly as needed. (note to self....spend more time at the gym)

At least three times, traveling at 75 miles per hour he attempts to change lanes due to the STEEP downhill grades without, yes without checking his mirrors!!!  Good gravy, I'm praying again...this time eyes closed looking slightly upward......  Just when I didn't think it could get worse he shares with us that he has to take medication that makes him cough..he adds, "well, I have an enlarged heart with a leaky valve but its no big deal".  Really, did this eighty some year old man just tell us at 75 miles an hour that he has a heart problem?????  Prayer time, I would kneel if I could....Lord please don't let anything go wrong with Mr. Schovo's heart today!  Especially going down this steep grade.....

About the time I think my legs are permanently going to be cramped up, my back is now starting to spasm....he starts telling us some great stories,  His first is, see that house over there? Belongs to Bill Gates".  (photo below) 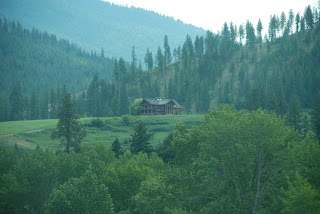 It was a great story how he met "Uncle Bill" not knowing it was him at the time and how very down to earth he was.  Bill Gates asks him if he would like to see the inside of the house and Mr. Schovo says, "well I don't think the owner would like that with me dressed in my dirty overalls".  Bill says, "I don't think he'd mind, I see him in the mirror every morning".

He shared towing stories with us, shared about his family with pride and even though I was nervous about living to tell the story of my day....I now have a soft spot for Mr. Schovo, I realize what a cute sweet little man he is.  Now I start to worry about him making the drive back to St. Regis alone :-(

We at last arrive in Missoula and as he is turning left into the driveway of  "Tire Rama" (yes its a real name) he pulls directly in front of a car coming from the opposite direction!!  We unload the car, shake his hand to thank him again for all he did to help us.  I of course told him to drive careful going home.... 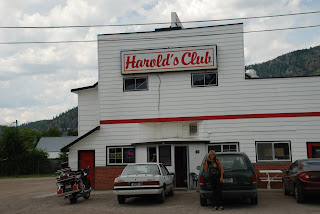 One quick stop after that to my long deceased Uncle Harold's bar/club.  It holds childhood memories as we would always stop in to say hello to my Uncle while going through Montana...oddly enough it was always okay for kids to come into bars with their parents.....ah...the wild west.  Any how, there was a little stage for entertainment and my sister's and I sang on stage once..only a few people in the club and it was daylight.  I'm sure it was "I've been working on the railroad" a childhood song we often sang :-)  On the wall still, goats heads behind a bubble of Plexiglas so the cigarette smoke didn't discolor them. I was surprised to see them still there.  Bob insisted to take my photo on stage, I agreed only if sitting.  I will say, the stage seemed so much larger back then :-0 Of course one of the patrons sitting at the bar knew my Uncle Harold and said some nice words to me. 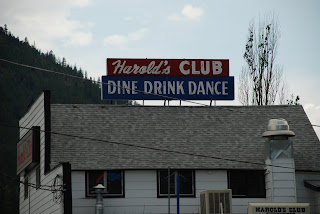 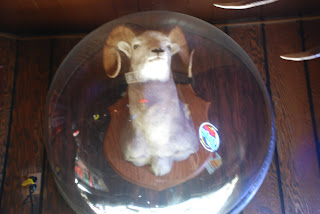 We made it to Belgrade, quickly checked into our room, showered and dressed in record time and made it to the reception only about and hour and a half late.  We scrapped together bits of left over food, and had the best piece of German chocolate cake ever.  The winds were strong and it was pretty cool out.  Was great to see our family members and they continued to celebrate as we headed back to our hotel at about 10 P.M.  Lindsay looked very beautiful and very happy. 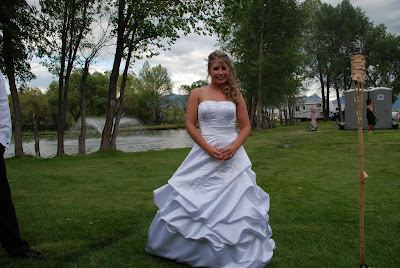 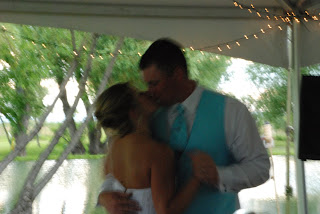 Yep it was quite a day, one I won't soon forget.  I am extremely exhausted and ready for serious rest.  Thankful to find our Wilson waiting patiently for us upon our return to our room, he too had a rough day, though he with plenty of room...he rode in the car :-) 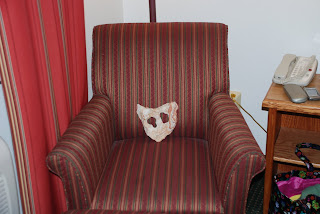 Thankful for Mr. Schovo and answered prayers !
Hugs....
Posted by debi at 9:04 AM